For over four decades, disco has ruled both the charts and dance floors around the world. With today’s modern pop artists still referencing classic tracks, covering them, as well as taking influence from the greats of the 70’s! 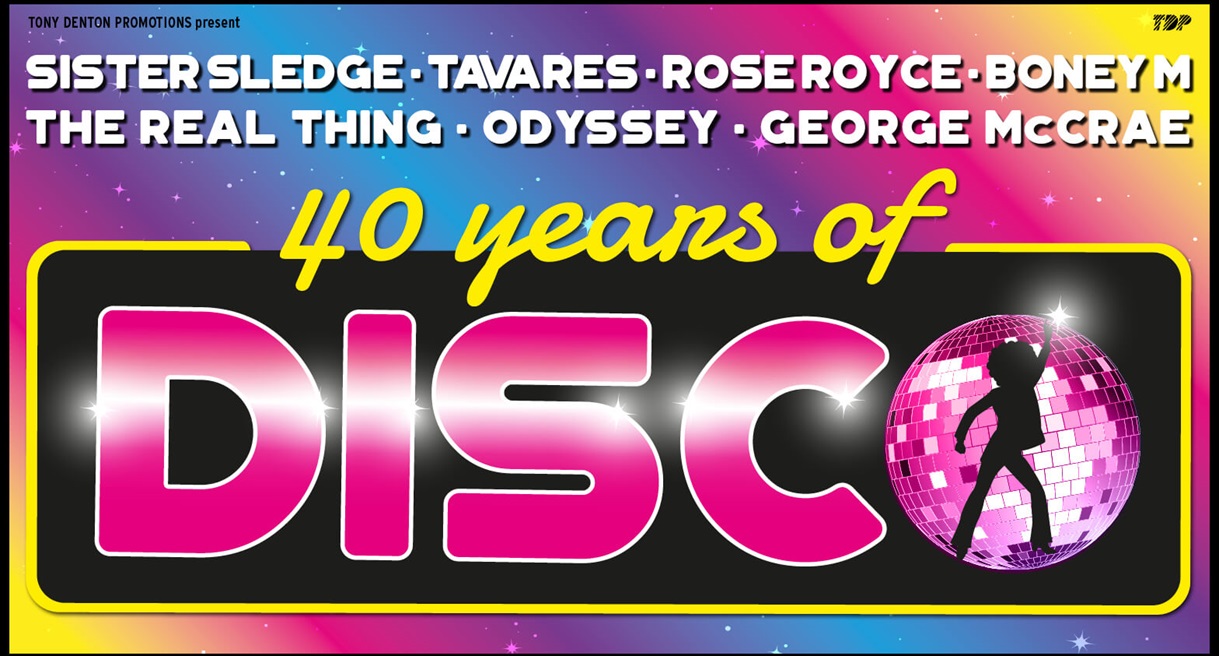 Get ready for DISCO FEVER!

This March the Genting Arena will take you back in time to the 70’s in the clubs, to the clubs of New York when disco fever was beginning to take hold, take a look at the epic line-up and a few of our favourite disco classics to get you dancing!

Sister Sledge sold millions of records worldwide with the album ‘We Are Family’. With multiple disco anthems and the hair to match, ‘Lost In Music’, ‘We Are Family’, ‘Thinking Of You’, ‘He’s The Greatest Dancer’ and the No.1 ‘Frankie’ never fail to get you dancing.

For over two decades Tavares had many, many Top 10 UK singles, plus a Grammy for their work on the soundtrack to ‘Saturday Night Fever’. However, it was 1975 which turned out to be their most successful year chart wise with their biggest US hit, ‘It Only Takes a Minute’ - later successfully covered by our favourites Take That and also sampled by JLo.

This was followed by a string of hits including ‘Heaven Must Be Missing An Angel’, ‘Don’t Take Away The Music’, ‘Whodunnit’, ‘More Than A Woman’ and many more…tune after tune, classic after classic, They were inducted into the RI Music Hall of Fame in 2014.

‘Car Wash’ (Ooh, do do do do do do do, working at the car wash yeh) was a huge hit for LA group Rose Royce in 1976 and it’s stood the test of time. This disco classic first featured on the album soundtrack of the 1976 movie of the same name, which starred Richard Pryor and George Carlin.

Their follow up album 1977’s ‘In Full Bloom’ featured the hits ‘Wishing On A Star’, ‘Do Your Dance’ and ‘Ooh Boy’. And their third album ‘Rose Royce Strikes Back’ (1978) featured the killer ballads ‘I’m In Love (and I Love the Feeling)’ and ‘Love Don’t Live Here Anymore’. If you were in any doubt about Rose Royce’s disco status their greatest hits album reached the No.1 spot on two separate occasions in 1980 spending a whopping 34 weeks on the chart.

Everyone knows the name Boney M and we challenge you to find anyone who doesn’t know at least one of their songs. The group had massive worldwide hits with songs such as ‘Daddy Cool’, ‘Sunny’, ‘Ma Baker’, ‘Rasputin’, ‘Hooray! Hooray! It's a Holi-Holiday’, ‘Belfast’ and ‘Painter Man’.

Their classic ‘Rivers of Babylon’ is the 7th biggest selling single of all time in the UK, selling over two million copies. The band also had the Christmas No.1 that year with ‘Mary’s Boy Child’, an underated Christmas song if you ask us! Our line-up this March features original member Maizie Williams.

The multi-million selling soul band The Real Thing features their three original vocalists Eddie Amoo, Chris Amoo and Dave Smith. The trio have sold over three million singles that also include the hits ‘You To Me Are Everything’ , ‘Can’t Get by Without You’, ‘Whenever You Want My Love’ and ‘Can You Feel The Force’. You won’t want to miss seeing these guys live!

One of the most successful soul/disco acts of their era, Odyssey’s success culminated in the early 1980’s when they topped the UK charts with the classic ‘Use It Up And Wear It Out’.

They scored several other Top Ten hits in Britain and throughout the world. From their debut album emerged their first smash single – ‘Native New Yorker’, an international hit late in 1977. After that the hits then came thick and fast - the long running ballad ‘If You’re Looking For A Way Out’, a brilliant re-working of the Lamont Dozier classic ‘Going Back To My Roots’ and ‘Inside Out’ amongst others.

George McCrae was very much a mover and shaker in those early disco days. Disco kings Harry Casey and Richard Finch of KC & The Sunshine Band both produced and wrote his first single with the hit ‘Rock Your Baby,’ topping the charts in 1974. But he wasn’t a one-hit-wonder, McCrae’s other hits include ‘It’s Been So Long’, ‘I Ain’t Lying’ and ‘I Can't Leave You Alone’.

Now if that’s not got you in the mood to D-I-S-C-O we don’t know what will! Tickets available now .