IT'S NOW OR NEVER FOR FRANKIE GAVIN

Local lad and boxing supreme, Frankie Gavin, faces off against Namibian powerhouse, Bethuel Ushona with the IBO Welterweight World title up for grabs! It's Now or Never for Frankie, but can he do it? 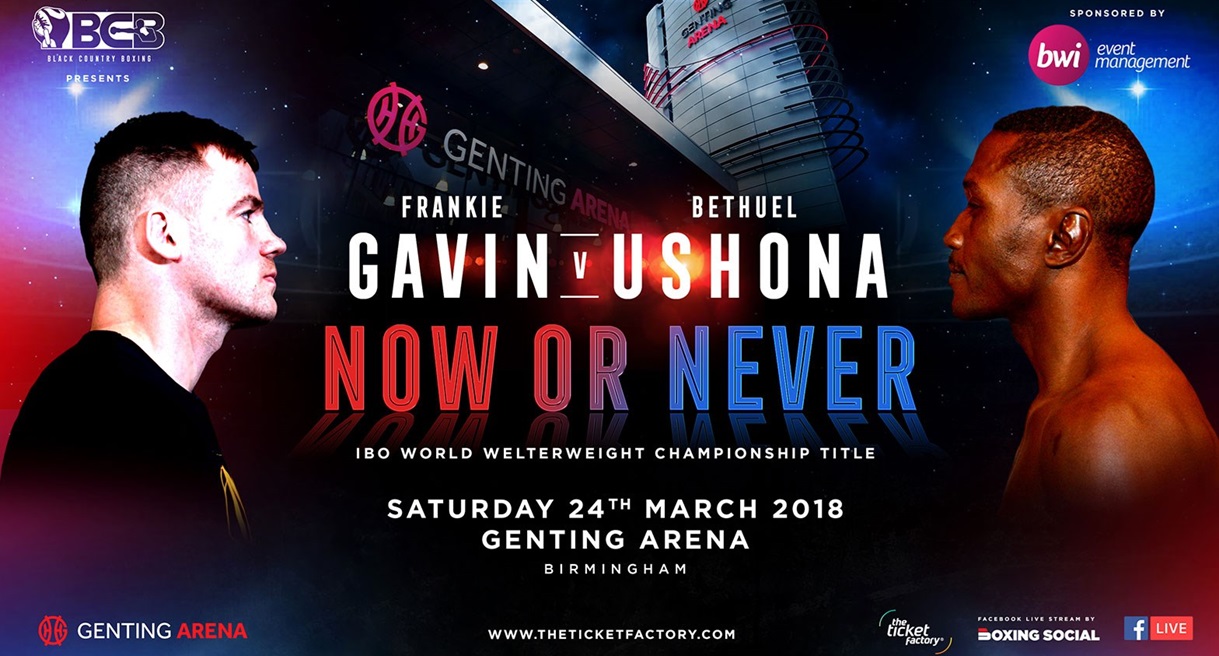 Birmingham boxing favourite Frankie Gavin has vowed there will be no more ‘Fun Time Frankie’ as he prepares to face up to his biggest ever challenge and a world title fight.

Here's a taster of what you can expect this March...

Who is Frankie Gavin?

Frankie Raymond Gavin, one half of the main event, is a former British and two-time Commonwealth Welterweight Champion. Not too long ago, Frankie competed for the IBF Welterweight Championship against the undefeated Kelly Brook, and what a fight Gavin put up. He'll now look at addind the IBO Welterweight World title to his collection!

We're fully behind Frankie and we hope the Brummie Boy can bring hom the bacon in a few weeks' time - you can do it, Frank!

RELATED ARTICLES
IT'S NOW OR NEVER FOR MATT SEN & SHAKAN PITTERS! Dreams will come true as 30-year-old Brummie, Matt Sen and former professional footballer, Shakan Pitters, both compe... 21/03/2018
HUGE CLASH TO TAKE PLACE AT CAGE WARRIORS 98 This one is fresh off the press - it's official, the Welterweight Championship will be on the line at Cage Warriors 9... 15/08/2018
CONFIRMED: MORE BOUTS ADDED TO CAGE WARRIORS 98 On top of the huge fight between Paterno and Houston, five more bouts have been added to the card for Cage Warriors 9... 23/08/2018