Rock-metal Gods took to the Genting Arena stage here in Birmingham on Monday night and wow, let’s just see we haven’t fully recovered from their ridiculously amazing show. Anyone else’s ears still ringing? Read all about it here! Why can’t all Mondays be like this? Proving even after 37 years they’re still the masters of metal, on Monday night I was well and truly welcomed into the Metallica family at their sold out gig.

I mean seriously, they were [insert expletives] amazing! And loud, but in the best way, the sort of gig you feel in your chest. So loud in fact that mid-way through One there was a tiny technical hitch when a PA packed up but it was soon fixed and the crowd revelled in a different level of engagement from Lars and Roberto Trujillo as they messed about on stage.

I think the majority of rockers I know went through a bit of a Metallica phase at some stage of their musical awakening but I probably haven’t revisited them for a good 15-or-so years and I was not disappointed. I will stand by the fact that Heavy Metal fans are the best fans in the world with the whole arena singing along to rock classics as we waited for the band to come on stage.

But back to the actual show…firstly, the moving cube screen things! WTH?! So cool, changing every song from fan artwork to flames to the seriously creepy people stuck inside them as the band played ‘Welcome Home (Sanitarium)’. AND FIRE! They couldn’t play Fuel without some actual flames. Being in the round even at the back you felt really close to the action, with a mic at each corner, and on each edge of the square stage as the band members made sure every angle was covered. I think I’d forgotten how good they are as a band, so many tunes and great to hear the classics mixed in with new material, plus we were treated to an epic cover of ‘War Pigs’. 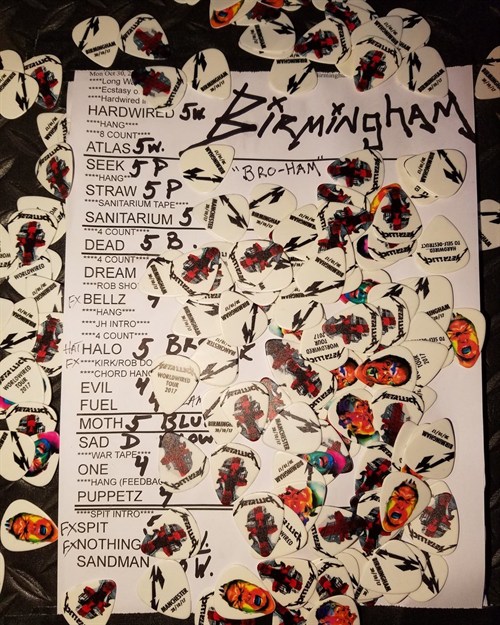 Mid way through all four band members drummed on video cubes on stage – and I am aware as I write this how weird that sounds if you weren’t there, but trust me it was amazing. They played ‘Moth To The Flame’ in tribute to Amy Winehouse followed by back to back ‘Sad But True’, ‘One’ and ‘Master of Puppets’ and the crowd enjoyed every second. I have never seen a more packed arena floor.

An encore was a given, and definitely didn’t disappoint with a track of their latest album ‘Spit Out The Bone’ before closing with ‘Nothing Else Matters’ and of course ‘Enter Sandman’. All I can say is that it was so so good!

A show I’ll remember for the fans as much as the band, welcome to the Metallica Family!