Unbelievable. Drake returned to Birmingham after two-years away, this time as part of his Assassination Vacation Tour – and it was incredible! Relive yesterday’s show OR get ready for Drizzy’s two remaining Brum performances with our verdict from this epic night with the 6ix God! Before the lights dimmed and Drake burst onto stage here in Birmingham, we were treated to two seriously strong support acts in Drizzy’s OVO team-mate Baka Not Nice and fellow Canadian Tory Lanez. Both sounded great and got everyone inside Resorts World Arena ready for Champagne Papi’s arrival!

It was then time for the return of the boy - we asked to see the boss, so they sent him (dawg)… 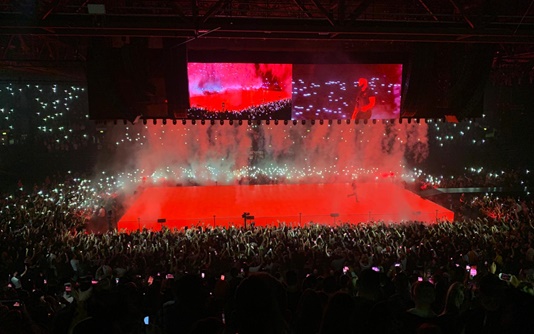 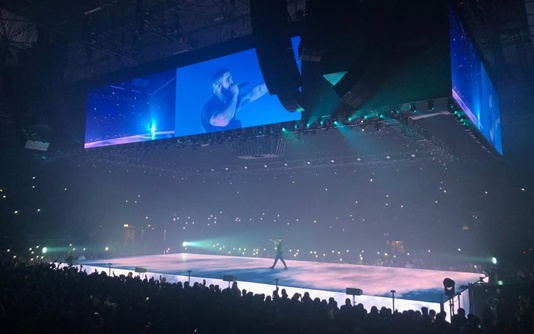 In a setlist which featured around 40 (yes, four, zero) tracks, picking one to kick off his Assassination Vacation Tour must have been a difficult decision – but as soon as 8 out of 10 echoed around the venue, we knew we were in for an unforgettable night.

Drake then followed this up with Mob Ties, also from Scorpion, before throwing it back to 2013’s Nothing Was The Same EP as he dropped in Started From The Bottom.

Drizzy took a moment to declare his love for Birmingham and thanked fans for supporting him from day-one. Drake has brought numerous of tours to the city and stated “I always feel like I’m home when I come to Brum. I’m not playing to a bunch of strangers, I feel like I’m performing in front of my friends and family and I love you.”Which obviously the Brummie crowd went nuts for…but he wanted to put the audience to the test.

He played both sides of the venue off each other with a little Sing Off Battle, giving the right side Jumpman to chant back to him and the left side Both (feat Gucci Mane) and to say the noise was deafening was an understatement. You lot belted it back to the boy, word for word, beat for beat – it was incredible!

Drizzy then took back the reigns and worked through Know Yourself, Elevate, Going Bad, Energy and Yes Indeed….which is when a flying yellow Ferrari (like Pikachu) made its way over the audience. It really was something else.

One of the biggest positives of Drake’s Assassination Vacation Tour was the huge scope of albums, tracks and features he covered within his set. My particular fave was a journey through 10-years of hits in a massive mash-up. The medley combined Crew Love, Trophies, Over, Headlines, HYFR, Blessings, For Free and The Motto – and that nostalgic feeling is still with me a day after the show.

Fans were not only treated to Drake at the absolute top of his game in terms of his performance and presence, but we also got a proper SHOW! The production was on point; the projections on the stage took us from swimming pools, to volcano's and even at one point featured a massive iPhone as homemade versions of the In My Feelings Challenge donned the floor Drizzy was dancing on. The combination of pyros, lighting and all round set up was mind-blowing.

For me, the show ceremented Drake as the biggest and best artist in the world right now.

BBC 1xtra’s Tiffany Calver then gave us a monster DJ set whilst Drizzy took a quick 10-minute breather. The atmosphere didn’t dip at any point as Calver kept the whole Birmingham crowd HYPED!

The 6ix God then returned to the stage and stripped things back – slowing the pace down as he stood in the centre of the stage and showed why he’s not just a rapper, he’s an all-round performer. Drake gave us a deep rendition of Passionfruit, Peak, Jaded and Sooner Than Later which had everyone swooning.

Aware of the change of pace, Drake announced that it was “time to get things going again” as he moved swiftly into Controlla, Work, One Dance, Hotline Bling, Nice for What, Fake Love and In My Feelings. Everyone from the seated blocks and VIP, down to those in the pit were giving us their best moves from the iconic Hotling Bling dance to the In My Feelings challenge as “Kiki, do you love me?” bounced around the venue.

Earlier on in the show Drake announced that he had brought some friends along for the party here in Birmingham which was met with a crazy reaction…but boy did Drizzy make us wait! You could see groups of fans speculating who might join him on stage and around five songs from the end of the show, it became clear who it was going to be. Only bloody GIGGS!  The intro to KMT dropped, Drake blasted through his verse and then boom – Hollowman was in the building! The pair have been good mates for the last couple of years, working together in the studio and joining each other during tours and festival sets...and their connection on stage was so genuine. Potential Drake and Giggs album one day? We hope so!

It was then back to Drake to close the show with four big hitters including Sicko Mode, Nonstop, I’m Upset and finally bringing this colossal show to an end with Gods Plan. We had confetti, we had big pyro explosions, we had more crazy production and we had possibly the best finale to the ultimate night of Drake.

Luckily enough for us, that was the first of three shows here in Birmingham meaning we’re hyped to do it all over again tonight (Wednesday 27 March) and Thursday too! If this has got you chomping at the bit, then you can still get your mitts on some last minute tickets below. Go on, you won’t regret it!

GIVE ME DRAKE TICKETS