Steve Martin and Martin Short talk about their new show!

Two of the Three Amigos are hitting the road with a banter and banjo-filled double act. But it’s not about nostalgia, they insist! Here's the best bits from their recent interview with The Guardian! 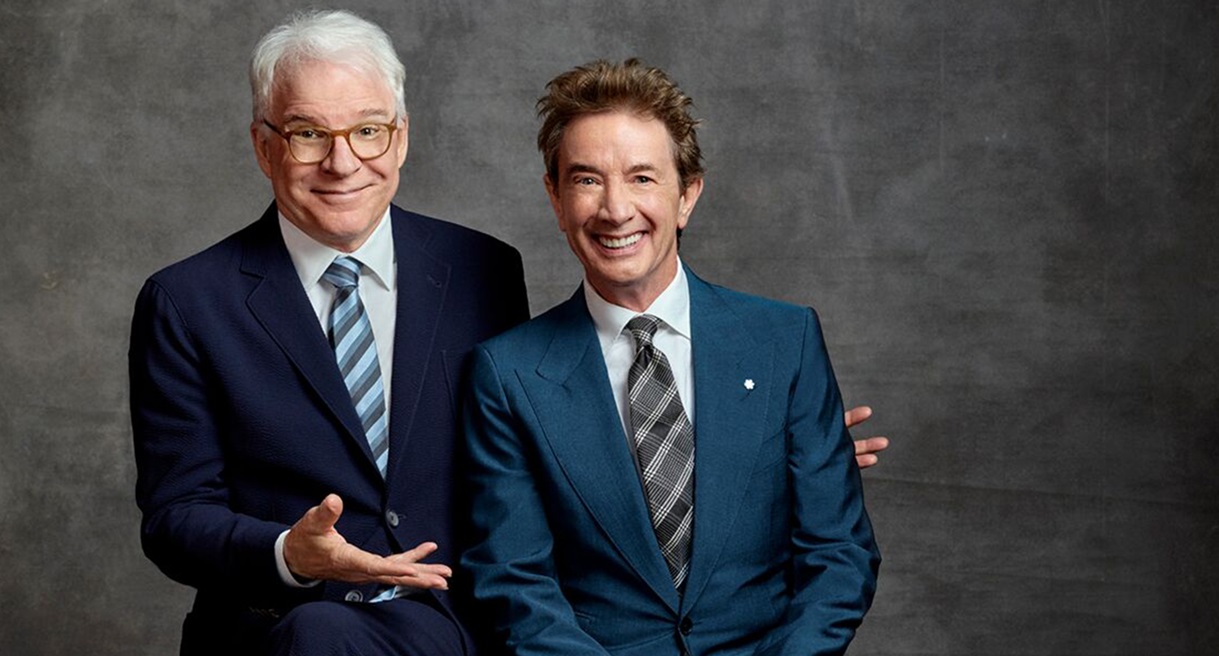 Comedy icons Steve Martin and Martin Short will bring their critically acclaimed tour “The Funniest Show in Town at the Moment” to Birmingham for the first time in 2020. This celebrated show redefines the form in unexpected and profound ways, from two of the funniest, most influential and much-loved talents of the past century.

“The Funniest Show in Town at the Moment” follows Steve Martin and Martin Short’s sold-out tour “An Evening You Will Forget for the Rest of Your Life”. The show was filmed for a Netflix special that earned rave reviews and garnered four Emmy nominations. Fuelled by comedic precision and anchored in a lifelong friendship, Rolling Stone called the special “wryly hip but unexpectedly touching,” with the New York Times describing it “gleeful and satisfying.”

The duo recently spoke to the guys at The Guardian in what was a hilariously good interview...did you expect anything else? Here's some of the best bits from the interview, which you can read in full here.

The pair have been close friends since co-starring in The Three Amigos (with Chevy Chase) in 1986. “We’ve been through a lot together,” says Martin: “Marriage, deaths, births and divorces.” It was shortly after the death of Short’s wife, Nancy Dolman, and before the birth of Martin’s first child (he was 67 at the time), that they were asked to interview one another on stage at the Chicago comedy festival. “It went really well,” says Martin, “and we said, ‘Let’s do it again, that was fun.’ And the more we did it, the more we thought, ‘We need a real show, we can’t just sit there and talk.’”

So they came up with one, then were Emmy-nominated for its Netflix incarnation, entitled An Evening You Will Forget for the Rest of Your Life. The actor (and Short’s pal) Catherine O’Hara described it as “a children’s show for adults”, while others reached for the term vaudeville – which mystifies Martin and Short. “I’ve never quite understood what vaudeville means,” says the latter, “except that it’s a quick succession of different acts. Which describes our show, I guess – because Steve and I do stuff together, then I do stuff alone, then Steve does, then he plays the banjo and we have this brilliant band come on.” The term also reflects the old-school nature of the pair’s relationship: their quick back-and-forth, the playful spirit of one-upmanship, the teasing that doesn’t even pretend to conceal their fond camaraderie.

“We’re absolutely a double act,” says Short. Martin references Dean Martin and Jerry Lewis, Abbott and Costello – but insists: “We don’t rely on nostalgia in our show.” They’re not trying to be old-fashioned, nor cash in on affection for their movie work. Yes, admits Short: “If you’ve been in the movies when someone was 12 or 13, and now they’re 40 and seeing your show, there’s a nice feeling to that. It feels like you’ve been part of their life.” But the duo aren’t resting on laurels, says Martin. “I like to think of this as hopefully among the funniest shows the audience has ever seen. That’s what we’re trying to create.”

Do they feel connected with the 21st-century comedy scene? At this question, discord breaks out. “I feel like we’re pretty connected,” says Short – but Martin interrupts. “I was just going to disagree. I have no idea what’s going on.” Turns out, Martin retains a post-traumatic dislike of live comedy clubs. “I get this taste of cheap wine in my mouth and hostile audiences. So I don’t like to go see comedy live.” But if you want to be the funniest show ever, don’t you need to keep up with the competition? “Well, I don’t feel like we’re in competition,” says Martin. “I used to.”

That’s why both are happy that their double act has assembled only in the twilight of their careers. “It’s the perfect time,” they both say. “If we’d done it in the 80s,” says Martin, “we would measure it a little more and be more competitive. But at this point we’re not. We’re just playing to an audience. We like them, they like us, and everything is fine.” Both agree that Martin is the “sensitive” one of the duo, more concerned about audience reaction. “You’re more of an artist,” says Short – whereas he, Short, is the “confident” one. “We always say about Marty that he’s laughing on the outside,” says Martin, “and laughing on the inside too.”

All there's left to do now is sit back and wait for March 2020 to roll round!