WHAT TO EXPECT FROM ENRIQUE

Enrique brings his All The Hits Tour to the Genting Arena in just a few weeks time and by the sounds of it, it's exactly what it says on the tin...ALL of the hits! Here's what Enrique had to say on the tour, the UK acts he's digging at the minute and life as a dad!

Enrique arrives here in Birmingham on 27th October and we're literally counting down the days...and to get you lot ready, here's the man himself talking all about the tour! 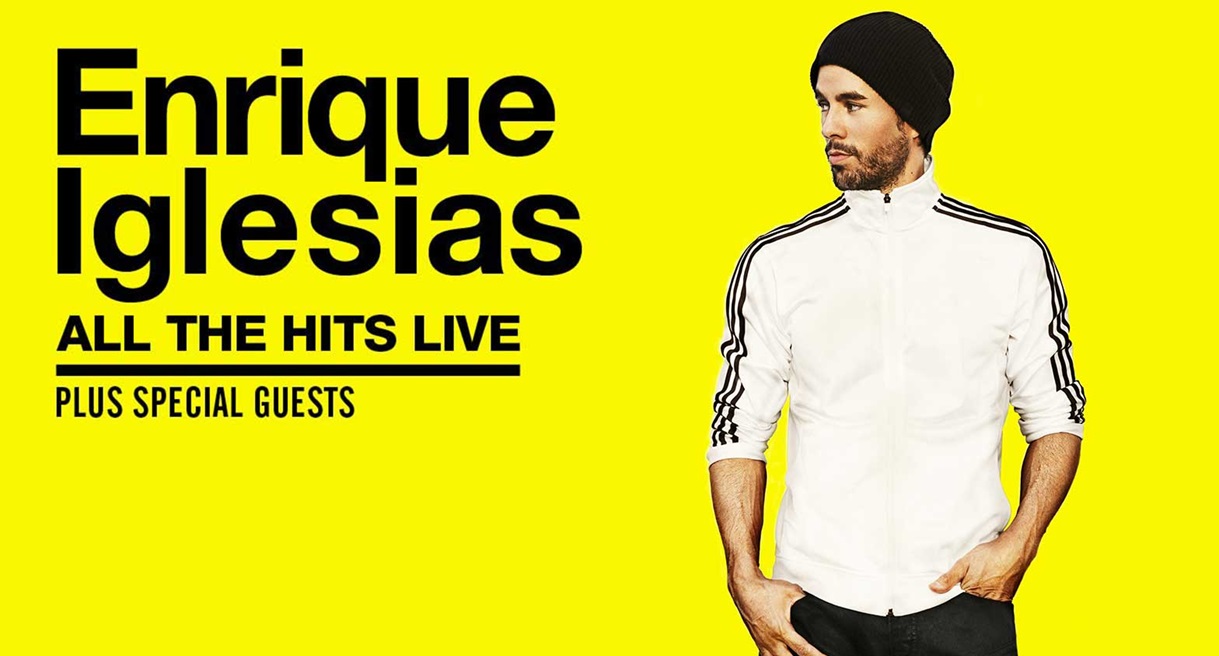 What can we expect from your Hits tour?

"Definitely all the hits. There’s a bunch of them that people will enjoy. I haven’t been to the UK on tour in quite a while now. If I’m not mistaken, 2014. Crazy how time flies. I always say this but I honestly enjoy every time more and more being up on stage. I think a lot of it has to do with the songs and the songs that I am able to pick, the songs that I’ve written over the years. That makes the show a lot more interesting - and of course, the production. From a production standpoint I want to make sure it’s as good as it can be.”

You have such a huge back catalogue of fantastic songs. What’s the technique for narrowing down the set list?

“In this case obviously it’s called the Hits tour so we want to play as many songs as possible that were released and that were successful. Really concentrating on that. At the same time still making sure that the set list is something that you enjoy on stage and performing.”

You collaborated with UK X Factor winner Matt Terry on Subeme La Radio, which was huge. Are you going to invite him down to perform with you in London perhaps?

“We’re definitely gonna try. I would really like that. Matt helped a lot with it in the UK and it would be lovely to get him on stage.”

He had big success with you then unfortunately his record label let him go. What career advice would you give him on where to take things next?

“We’re not going to let him go. We’re going to let him come up on stage. It all comes down to the music at the end of the day - it’s pop. Music is not an easy ride. In my career I think it was fundamental to be able to write as many songs as possible. Whether you co-write or write your own music it’s important. Eventually you can’t really rely on other songwriters. If you are, that’s fine. I’m not saying you can’t sing songs from other songwriters but if you can write your own music, your own songs, it’s going to help a lot.”

Which UK acts are you a fan of at the moment?

“I feel like UK acts are taking over the whole music scene in so many ways.”

Do you any memorable fan experiences that stand out?

"Believe it or not, I know this might sound very normal to a lot of artists out there but fans waiting outside the hotel or in the lobby for hours or days to me that’s crazy. It’s extreme dedication and a lot of patience. Honestly I still don’t take it for granted. I love seeing them. I love talking to them. I love taking pictures with them. I always try to make time. I know if it wasn’t for them I would never, ever have been able to do this for such a long time. Their support means everything. Even when there’s been moments when I’ve said: ‘After this album, maybe this is it’. Something always happens with a fan that inspires you and motivates you to keep on doing what you do and give it the all. Give it your best.”

You’ve had moments when you’ve thought you might stop music?

“Yeah, of course. There’s been many of those moments. I still have those moments now once in a while. There’s been moments when I’ve been, not so much touring, but definitely making albums. Making albums is a lot of work. I’m extremely grateful that I’m able to do it but it can be frustrating at times in the studio. When you’re stuck and you’re not writing as well as you think you could be writing, and the songs you think are finished and suddenly you realise that you’re not. You have to restart and it’s days, weeks and months of grinding, working on that. It can be frustrating especially when you envisage something and want it a certain way. Then you look around and say: ‘Man, what am I complaining about?’. I talk to my friends. I have friends that have to go to work every day to maintain their families and they do a nine to five job that they absolutely hate.”

People don’t always see the other side of the music industry and think it’s always glamorous. There’s a lot going on behind the scenes, like waiting for producers, record company scheduling and touring is hard.

“At times touring can be gruelling. The longer you’ve been doing it you realise you have to be healthy; you have to make sure that you rest. For example now when I do the UK shows I know that those two weeks I’m going to have to make sure I’m perfectly healthy and get as much rest as possible. Five shows might not sound like a lot but in 10 days you want to be as focused as possible."

Juggling twins must be hard work?

"I have realised that the dad is there to support. The moms are the heroes. It’s a tough job. I don’t know how moms do it to tell you the truth. In my case, when I watch Anna and the way she takes care of our babies, and how she is with the babies, it’s inspiring. It’s beautiful.”

A supportive partner helps mums too...

"For me honestly it feels surreal to be a dad. They’re only eight months so sometimes I wake up and I’m like: ‘Oh, s***. I forgot. I have kids. I have babies. Don’t forget - you’re a dad now. Don’t do anything stupid’.”

Everything changes when you become a parent.

“Definitely but part of it is making sure you still do the things that you love. Knowing at the back of your mind you have to be more responsible, and there might be things you’re not able to do, but it doesn’t mean your life has to change drastically. And if it does change, it’s for the better.”

Do you make time for date nights?

“What is that? I’m kidding. It’s not easy between work and schedules and babies right now but we definitely do. We’re juggling everything the best that we can. We make our mistakes but we learn as we go along.”

Will Anna and the babies come on tour with you?

“I’m not touring so, so much this year. That’s why the shows that I’m doing I feel so grateful for. I want to make sure I concentrate on places, for example the UK. When it came up I was like: ‘I have to go to the UK because it’s been too many years’. To me four years is way too long and it shouldn’t be. It’s too much time in between shows. At the same time the same thing happens with different places that you haven’t been to in a while. The UK I have always visited, especially touring, two years, three years max.”

I believe you’re involved in a new Zela restaurant opening in London with Cristiano Ronaldo and Rafael Nadal. Can you tell me about that?

“I’ve been partners with Ronaldo and Nadal for I think this is our third year. We’re opening up a branch called Zela in London.”

What made you decide to get into that side of the business?

“One, because it’s different. I don’t know anything about it but I love food. It all started with Spanish food with Nadal then from that we went to Zela, which is more Asian fusion but still with a bit of a Spanish flavour. The right people came along that I trusted with how they work. They’re open to everything we have to say and are involved. It was fun and nothing to do with music so I thought it would be a different thing to do. I met Ronaldo in Manchester. The first time I ever met him was back in 2008. He’s passionate about the restaurant. He got involved about a year and a half ago.”

What are your plans for next year?

“I definitely want to keep on doing shows. I’m in the studio right now, writing as much as possible. I always think: ‘I don’t know how many albums I have left in me to make’. I do want to make sure that this one that I realise, hopefully in 2019, is good and that I’m satisfied with it. Hopefully I get to that point. I do it one day at a time. I try to enjoy it. I don’t know if in 2019 I’m going to be touring or not or what’s going to happen. I try to enjoy where I am right now in my life and take it one step at a time and enjoy every single day. I never really plan so far ahead. If you ask me what I’m going to be doing six months from now, I dunno.”

I hope you at least get some time off to enjoy the festive season when it comes.