Plus Support from TOYAH

This event has been rescheduled 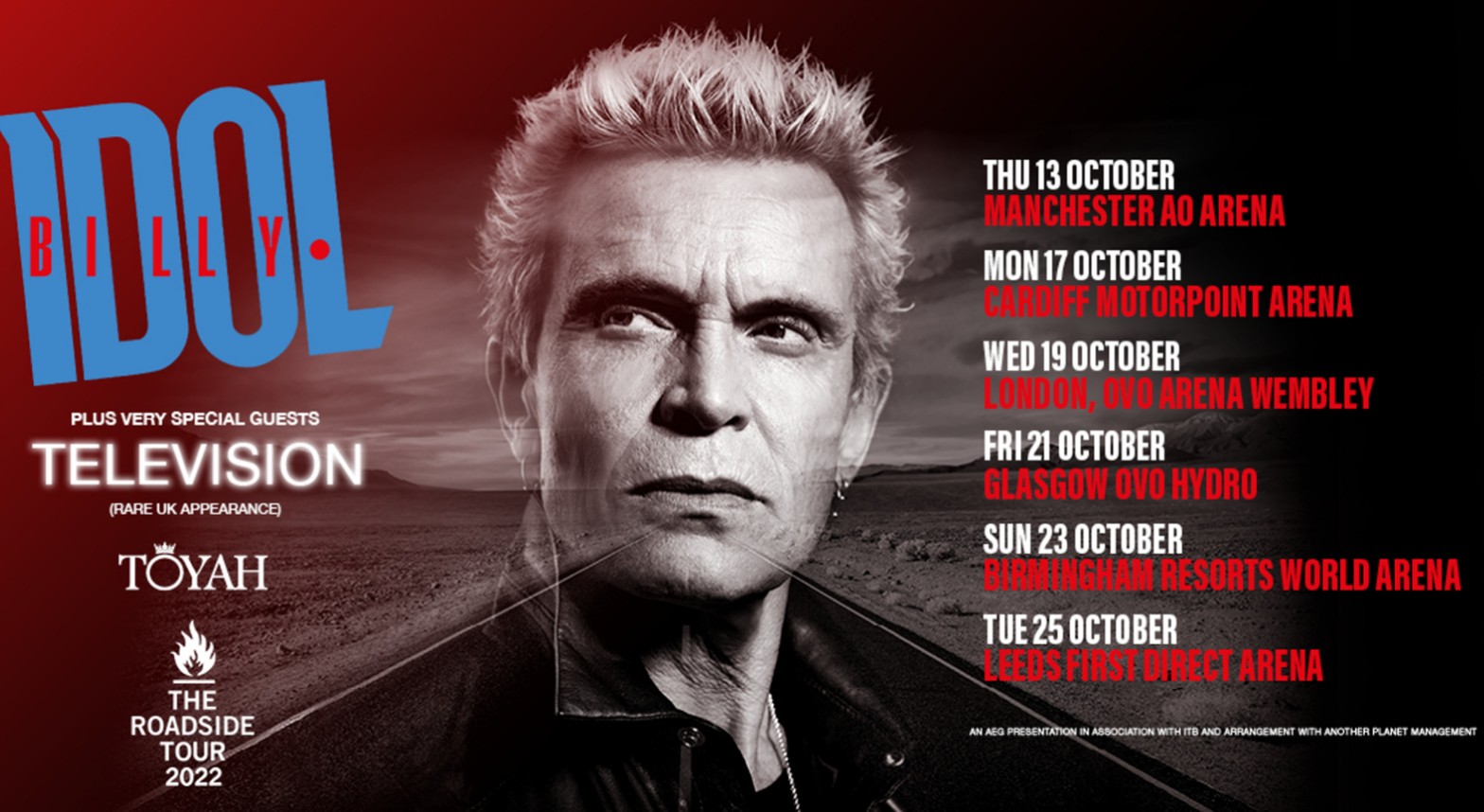 The Billy Idol shows can no longer take place in June 2022.  Due to unexpected circumstances dates have been rescheduled in October 2022 as below, and all original tickets remain valid.

The new very special guest will be: Television. (Their first UK show in 8 years performing the album ‘Marquee Moon’ in full).

The world’s favourite rebel Billy Idol has rescheduled The Roadside Tour 2022 with new dates now set for October 2022. All existing tickets are still valid for the revised dates.

Says Billy Idol: “As many of you know, this year has dealt me some health challenges which are nearly, but not quite resolved. While my recovery is almost complete, I have been given doctor’s orders to stay off the road until August - and so it is with great frustration that we must reschedule the UK Tour for October of this year. Thank you for everyone’s understanding and support. These shows will be worth the wait!”

Billy will come to the UK with new music and a stack of timeless classics. For his first appearances in the UK since 2018, Billy will play 6 Arena shows with the rescheduled dates listed below.

Says Billy Idol: “Sadly, The Go-Go’s are no longer able to join us. I am thrilled to share that now opening all UK shows will be Television, one of my favourite bands from the original New York punk scene and an inspiration to me throughout my career. I will be honoured to share the stage with them and hope everyone will come early to enjoy their set!”

The global lockdown of 2020 gave Billy time to reflect and thoughts turned to his near-fatal motorcycle accident of 1990, how he dealt with it and how it related to the current crisis. “It seemed quite logical and natural to write something about my motorcycle accident,” he says. “I may have been saying, well, this is what people go through when they are in trouble. I think I was unconsciously making that connection.

“Certainly, the motorcycle accident was the catharsis, the wake-up moment. A little bit of me got left by the side of that road. Maybe I left behind the irreverent, youthful Billy and opened the door for a more attentive father and more sensitive musician. Something did get left by the roadside, but it was not necessarily a bad thing in the end.”

Billy’s reflections are captured in the lyrics of Bitter Taste, one of four tracks on his 2021 EP The Roadside, which was his first new music for seven years and as hard-hitting and relevant as ever.

BACK TO LIVE INTRODUCING VENUE PROTECT
KEY INFORMATION YOU NEED FOR THE RETURN OF LIVE EVENTS
FIND OUT MORE
£67
£80.50
Calls to 03 numbers typically form part of your inclusive calling plan. However, call charges may vary – refer to your service provider for current charging information.