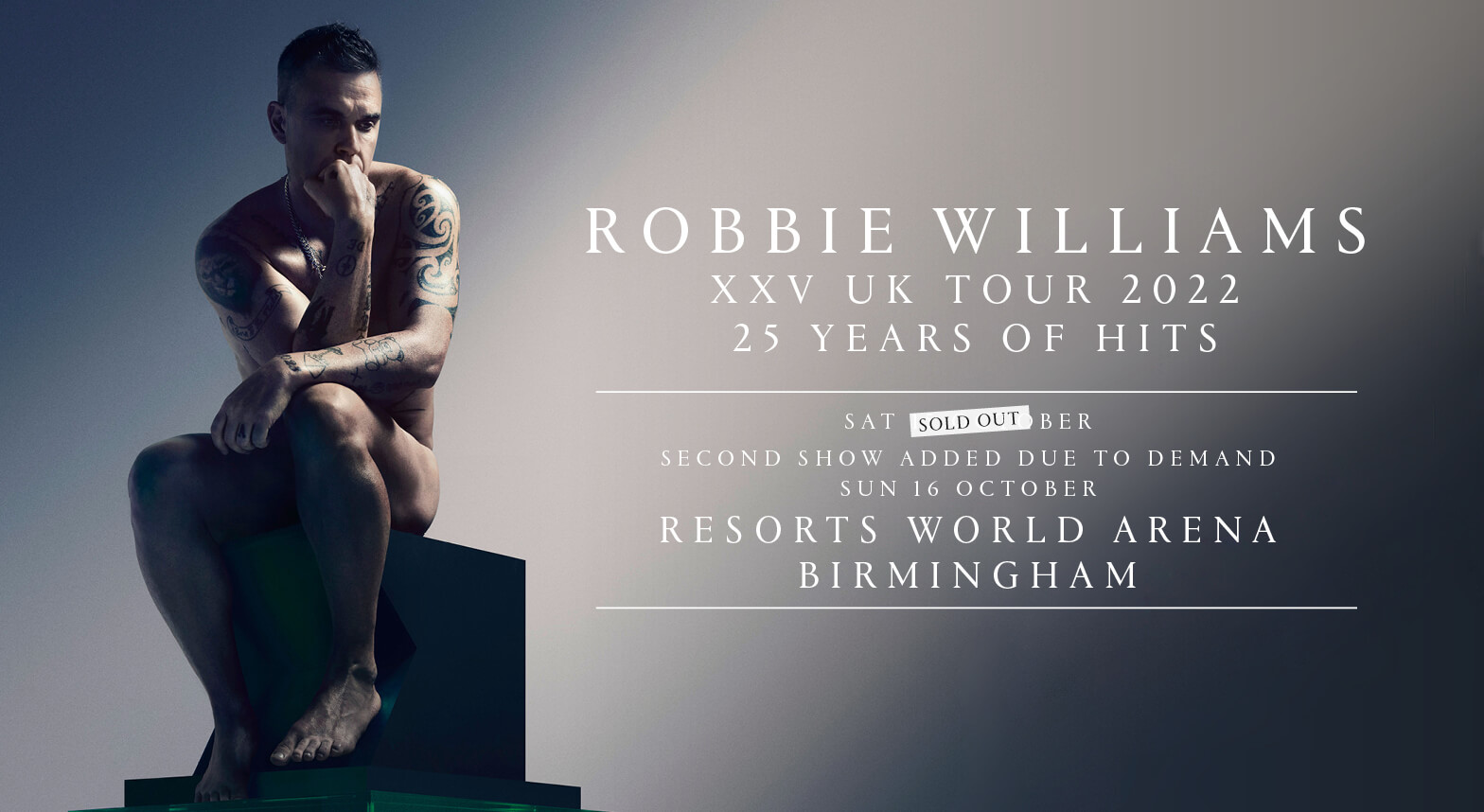 CELEBRATING 25 YEARS AS A SOLO ARTIST

‘THE XXV TOUR’ WILL SEE ROBBIE PERFORM SHOWS ACROSS THE UK & IRELAND heading to Birmingham for HUGE Saturday night this October!

Last week Robbie announced his new album ‘XXV’, out on 9 September. The record features many of his greatest hits and fan favourites, all re-recorded and newly orchestrated with the Metropole Orkest. The tour will be a joyous celebration of Robbie’s 25 years as a solo artist. We can't wait!

As well as featuring countless Number 1 smash hit singles which have been newly orchestrated by Jules Buckley, Guy Chambers and Steve Sidwell, and re-recorded with the acclaimed Metropole Orkest in The Netherlands, ‘XXV’ also features several brand new tracks.

Both the standard and deluxe albums will include what is sure to be an instant classic, ‘Lost’, while the deluxe album will feature three more original tracks –‘Disco Symphony’, ‘More Than This’, and ‘The World And Her Mother’.

The new version of ‘Angels’ was released last week and was performed by Robbie during the half-time show at this year’s Soccer Aid, which took place on Sunday. Listen to ‘Angels’ here.The track listing for ‘XXV’ also includes the iconic songs ‘Let Me Entertain You’, ‘Millennium’, ‘Strong’, ‘No Regrets’, ‘She’s The One’, ‘Kids’, ‘Rock DJ’, ‘Feel’, ‘Come Undone’ and many more.

The album is another huge milestone in the glittering career of one of the world’s most decorated artists. Robbie has six of the Top 100 best-selling albums in British history, has sold a huge 80 million albums worldwide, achieved 14 Number 1 singles and a record 18 BRIT Awards –more than any other artist in music history. His most recent album, ‘The Christmas Present’, secured Robbie his 13th UK Number 1 album when released in 2019 -equalling Elvis Presley’s chart record as the solo artists with the most UK Number 1 albums. Robbie’s total chart-topping albums across his solo work and with Take That is 17, placing him in the top three acts of all time with the most Number 1s across their catalogue.

BACK TO LIVE INTRODUCING VENUE PROTECT
KEY INFORMATION YOU NEED FOR THE RETURN OF LIVE EVENTS
FIND OUT MORE
Calls to 03 numbers typically form part of your inclusive calling plan. However, call charges may vary – refer to your service provider for current charging information.